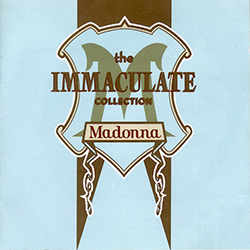 To this day, "The Immaculate Collection" remains Madonna's biggest selling album worldwide, with over 10 million sold in the U.S. and another 12 million outside America. Spanning 1983 through 1990, the set collects 15 of Madonna's biggest singles, along with two new tracks: "Justify My Love" and "Rescue Me." In fact, Madonna had so many hits during the '80s, there simply was not enough room on the album for all of her big singles. Even top five singles like "Dress You Up" and "Who's That Girl" couldn't be squeezed onto the set. "Justify My Love," a collaboration with Lenny Kravitz, hit No. 1 in the U.S. and went top ten just about everywhere else. "Rescue Me" was the follow-up, and at the time became her highest-debuting U.S. single, opening at No. 15 on The Billboard Hot 100. It would go on to peak at No. 9 in the U.S. and achieve top ten rankings throughout the world. "The Immaculate Collection" spent two weeks at No. 2 in the U.S. and nine weeks atop the U.K. charts - her longest run at No. 1 in that country.