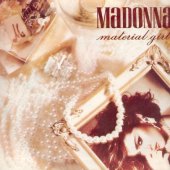 While certainly intended as a send-up of mid-80s commercialism and greed, the single was (of course) misinterpreted and wo15{a with her most well-worn nickname. The bass-heavy affair was produced by Nile Rodgers and quickly flew up the charts around the world, hitting No. 2 in the U.S. and top five status internationally. At one point during "Material Girl's" U.S. chart run, it was joined by "Crazy For You" in the U.S. top five, a rarity in the chart world. "Material Girl's" music video was almost as notorious as the song itself. Mary Lambert directed the clip -- inspired heavily by Marilyn Monroe's performance of "Diamonds Are A Girl's Best Friend" in "Gentlemen Prefer Blondes" - that would prove inescapable on MTV in the spring of 1985. The video garnered Madonna her first best female video nomination at the 1985 MTV Video Music Awards.