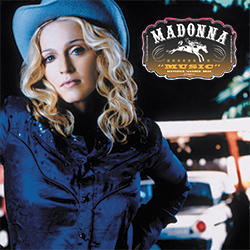 Two years after "Ray Of Light," Madonna returned with "Music," her first U.S. No. 1 album since 1989's "Like A Prayer." The album married her with French producer Mirwais and was an instant smash. It debuted at No. 1 around the world and was preceded by the title cut, which became her 12th No. 1 in the U.S. and spent a month at the top of the Hot 100. The singles "Don't Tell Me" and "What It Feels Like For A Girl" both reached top ten around the world. The former scored two MTV Video Music Award nominations: best female video and best choreography in a video. The album was nominated for the best pop vocal album Grammy and the "Music" single earned a nod for record of the year and best female pop vocal performance. "Music" secured Madonna the 2001 Brit Award for International Female - the first time she had won the trophy. "Music" has sold over two million units in the U.S. and another eight million internationally.