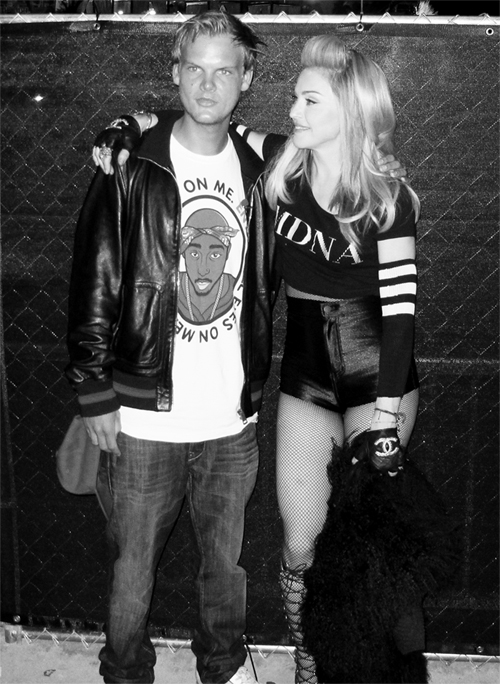 September 06, 2012
Madonna has invited Grammy nominated superstar DJ, remixer and producer AVICII, aka Tim Bergling, to join her at Yankee Stadium on September 6 & 8 for her MDNA shows in New York City. Bergling is reciprocating Madonna's surprise appearance at his headline show at Ultra Fest this year, when the two debuted AVICII's remix of her "MDNA" track "Girl Gone Wild". "She showed up and supported us, and this is my way of showing up and supporting her," Bergling told USA Today. The critically acclaimed AVICII, whose sets DJ Times called 'euphoric, epic, fun', will throw a massive dance party for 50,000+ fans expected that night.

No stranger to stadium size audiences, the 22 year old AVICII has, this year alone, headlined the ULTRA Music Festival, Electric Daisy Carnival, performed at Coachella and headlined at Lollapalooza.

Avicii announced his fall college/major market tour earlier this month. For more info, please visit www.avicii.com
Comments
7
You must be a logged-in member to add comments.
SIGN IN / SIGN UP
September 23, 2012 posted by teddyblair
golden triangle
I was fortunate enough to get invited into the Golden Triangle in both Ottawa and Toronto! MDNA is simply the most amazing tour!!! I so wish to get invited back again for another city. MDNA is a drug worth taking over and over and over and over! Positive side effects: dancing, euphoria, joy! Negative effects : none! Love you Madge! :-)
September 12, 2012 posted by Antara
Madonna Invitation
As we all can see, Madonna is moving successfully from city to city as her MDNA increases in popularity..Madonna and all her crew and all ICON team deserve a hats off to them..She has assembled the best of the best..Alan
September 08, 2012 posted by Naomi
Great DJ
Yeah, Le7els ! Invite him to perform in Brazil too !!!
September 08, 2012 posted by luluizinha
Hi is a Superstar
I enjoy him !
September 07, 2012 posted by Antara
Madonna Invitation
Madonna also has a wonderful crew of entertainers who work well with Madonna to put out such a great show each time..All are skillfully coordinated..Madonna knows who to invite and who to work with..She is the most qualified in the entertainment world..Alan//Madonner ICONer.
September 06, 2012 posted by Antara
Madonna Invitation
Madonna knows whom to invite to make her performance that much greater; so I say let it up to Madonna; all people attending will have a wonderful time..Madonna is the greatest and quite an intelligent woman...Alan
September 06, 2012 posted by boycapel
Lucky Duck
HeyHeyHey Girls and Boys Will Go Very Wild
Newer comments    1 - 7 of 7    Older comments