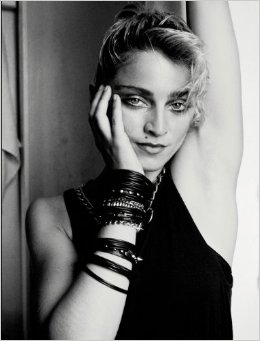 October 29, 2013
Photographer Richard Corman has just announced the release of an exclusive photographic book devoted to the photoshoot he created with Madonna back in 1983, a few months before the release of her first studio album.

"As a young photographer in 1983, I had the opportunity to capture a series of images with Madonna as she was on the verge of releasing her debut album," said Richard Corman. "The rebellious energy of the East Village was the backdrop to showcase Madonna's style, spontaneity and pioneering attitude. She consistently conveyed an attitude of fearlessness and fierce determination."

If you are in the U.S, you can pre-order the book from Amazon.com or straight from the publisher's website: www.damianieditore.com

In conjunction with the U.S. book launch, Milk Gallery in New York City is hosting a special exhibition featuring images from Madonna NYC83. The exhibition is free and open to the public from November 15 - December 15. For information, visit www.themilkgallery.com.
Comments
5
You must be a logged-in member to add comments.
SIGN IN / SIGN UP
November 06, 2013 posted by EsaNina
FINALLY!
I have always been hoping that they would print these photos in a book. I ordered a copy from the publisher site; they sell a version that is signed by Richard Corman. It's a bit more, but it's MADONNA :)
November 04, 2013 posted by LaIslaMaria
i love the 80's
i put this on my christmas wish list
November 02, 2013 posted by Gueu
Amazing
I'm crazy about this book
October 30, 2013 posted by VicB
I WANT MINE!!!
GREAT NEWS AS USUAL!!! THIS IS MADONNA!!!
October 29, 2013 posted by Antara
Madonna NYC83
Excellent photos of Madonna,at the beginning of her career....All these years passed, and Madonna...Ain't she still great?....Hell yes...
Newer comments    1 - 5 of 5    Older comments