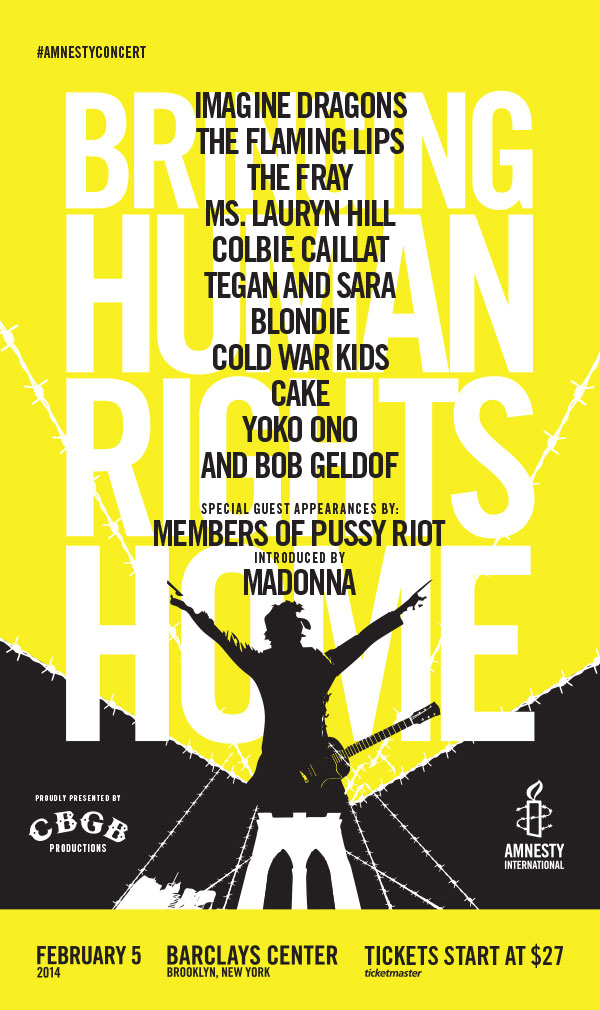 "I am honored to introduce my fellow freedom fighters Masha and Nadya from Pussy Riot. I have admired their courage and have long supported their commitment and the sacrifices they have made in the name of freedom of expression and human rights," commented Madonna.

Tickets are on sale from Ticketmaster. Other confirmed acts include Imagine Dragons, The Flaming Lips, Ms. Lauryn Hill, Tegan and Sara, The Fray, Cold War Kids, Colbie Caillat and Cake. Masha and Nadya were imprisoned for their participation in the Pussy Riot art collective. Hundreds of thousands of online actions by Amnesty International supporters helped bring about their freedom.

Madonna, a longstanding defender of the Pussy Riot art collective's right to speak out in defiance of restrictions in their homeland, is part of a star-studded tradition of prominent artists using the power of music to articulate their support for human rights on behalf of Amnesty International.

More information on the upcoming concert can be found at http://www.amnestyusa.org/Feb5concert. Follow #AmnestyConcert for live updates.
Comments
8
You must be a logged-in member to add comments.
SIGN IN / SIGN UP
February 19, 2014 posted by Werefox
Democracy Smothered in Kiev!
My country is agonizing! Kiev is on fire. Democracy has been made a bad joke. People are getting killed, tortured, kept hostage by the criminal government of our President Yanukovich backed up by the money and influence of the President Putin. Protesting people are labeled as terrorists. Truth and freedom cease to exist with every death of their defenders out on the main square of the ancient city where we saw you fight for a better world on the scene one summer ago. If this regime wins, it will put a black mark on the peoples' hopes for freedom throughout the world. I've looked up to you since I was a kid, now I have two kids of my own to look after. I am asking you as a mother to spread the word of what is happening to us!
February 10, 2014 posted by rabbitbunny
Someday we'll all be free!
Hey Madge, thank you for freeing Cat Riot in New York a couple weeks ago. I SUPPORT aiusa and the right to a Fair Trial! Meow and Hop!!-Rabbitbunny from outside of Baltimore! Equal Rights and Justice! Freedom for all! MADONNA FOREVER!
February 03, 2014 posted by lonelylisa
Thann you
Un french les droits de l'homme sont essentiels merci thé Queen Madonna
January 31, 2014 posted by mexico05
Amnesty International
Liberte d'Expression, et le Courage... Madonna et les Pussy Riot, mÃªme combat
January 31, 2014 posted by makeevalex
Thank you!
Thank you for supporting Pussy Riot!
January 30, 2014 posted by xpdri
Pussy Riot
Yeeeeeeeeeah!!!!! That's why I admire you. #Express yourself #Revolution of Love﻿
January 29, 2014 posted by LaIslaMaria
amnesty international
music makes the people come together-seeing M in the public eye always gets attention.
January 29, 2014 posted by Antara
Pussy Riot Amnesty
I remember this world wide incident from MDNA Tour Days..Madonna boosted Women's Rights substantially by this promotion...This incident must never be forgotten..technically sponsored by Madonna..
Newer comments    1 - 8 of 8    Older comments