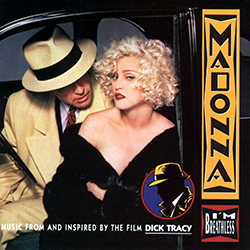 Madonna's companion album to the film "Dick Tracy" wasn't your standard soundtrack. While it included three songs that were featured in the hit film ("Sooner Or Later," "More" and "What Can You Lose") the bulk of the material was inspired by the movie. The set's first single, "Vogue" (originally slated to be the b-side of "Keep It Together"), was an international No. 1 hit. It was followed by the cheeky "Hanky Panky," a No. 10 U.S. hit and a No. 2 single in the U.K. "Vogue" earned a whopping nine MTV Video Music Award nominations in 1990, out of which it won three.