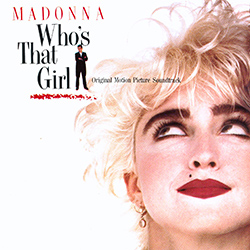 To accompany the film, Madonna released the "Who's That Girl" soundtrack. The album contains four new Madonna tunes: the title track, "Causing A Commotion," "The Look Of Love" and "Can't Stop." The title track was a worldwide No. 1, hitting the top of the charts in the U.S., U.K. and Japan, among other countries. It also earned a Grammy nomination for best song written specifically for a motion picture or television. "Causing A Commotion" spent three weeks at No. 2 on the Billboard Hot 100 and was a top ten worldwide hit. The ballad "The Look Of Love" was the third and final single outside the U.S. - reaching No. 9 in the U.K. and top 40 status in Europe.