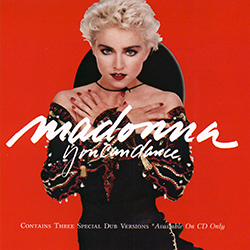 November 1987 brought "You Can Dance," a remix set of Madonna's early dance hits, featuring production work from Jellybean and Shep Pettibone. The lone new track on the album was "Spotlight," which climbed to No. 32 on Billboard's airplay charts - though it was never released as a commercial single in the U.S. The album sold well, considering its then-new concept, and has moved an estimated five million units worldwide.