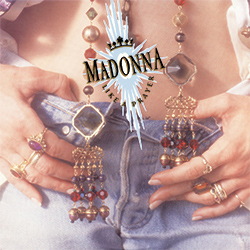 Her fourth studio album, produced by Madonna and Patrick Leonard, hit No. 1 around the world upon its release in March 1989. The album's title track reached the top of the singles chart in both the U.S. and U.K. and was followed by four more U.S. hits: "Express Yourself" (No. 2), "Cherish" (No. 2), "Oh Father" (No. 20) and "Keep It Together" (No. 8). "Dear Jessie" was released in the U.K. and hit No. 5. The album's videos earned seven MTV Video Music Award nominations, including best video of the year ("Like A Prayer") and best female video ("Express Yourself"). She took home the Moon Man for Viewer's Choice for the title video. In 1990, the video for "Oh Father," directed by David Fincher, won the Grammy for best short form music video. "Like A Prayer" has sold over four million units in the U.S., and another seven million internationally.