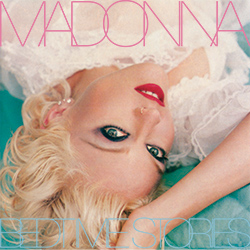 Collecting a gaggle of producers (Babyface, Nellee Hooper, Dallas Austin and Dave "Jam" Hall) Madonna turned out her sixth studio album in the fall of 1994. The album was immediately greeted warmly on the charts, with its first single, "Secret," reaching No. 3 in the U.S. The album's second release, "Take A Bow," became her biggest U.S. hit, spending seven weeks at No. 1 in the spring of 1995. Later that year, Madonna won the best female video trophy for "Take A Bow" at the MTV Video Music Awards. "Bedtime Story" (No. 42) and "Human Nature" (No. 46) were the third and fourth singles from "Stories"; in the U.K. the singles hit Nos. 4 and 8, respectively. In the U.S., the album hit No. 3 and sold over two million units and garnered a Grammy nomination for best pop album.