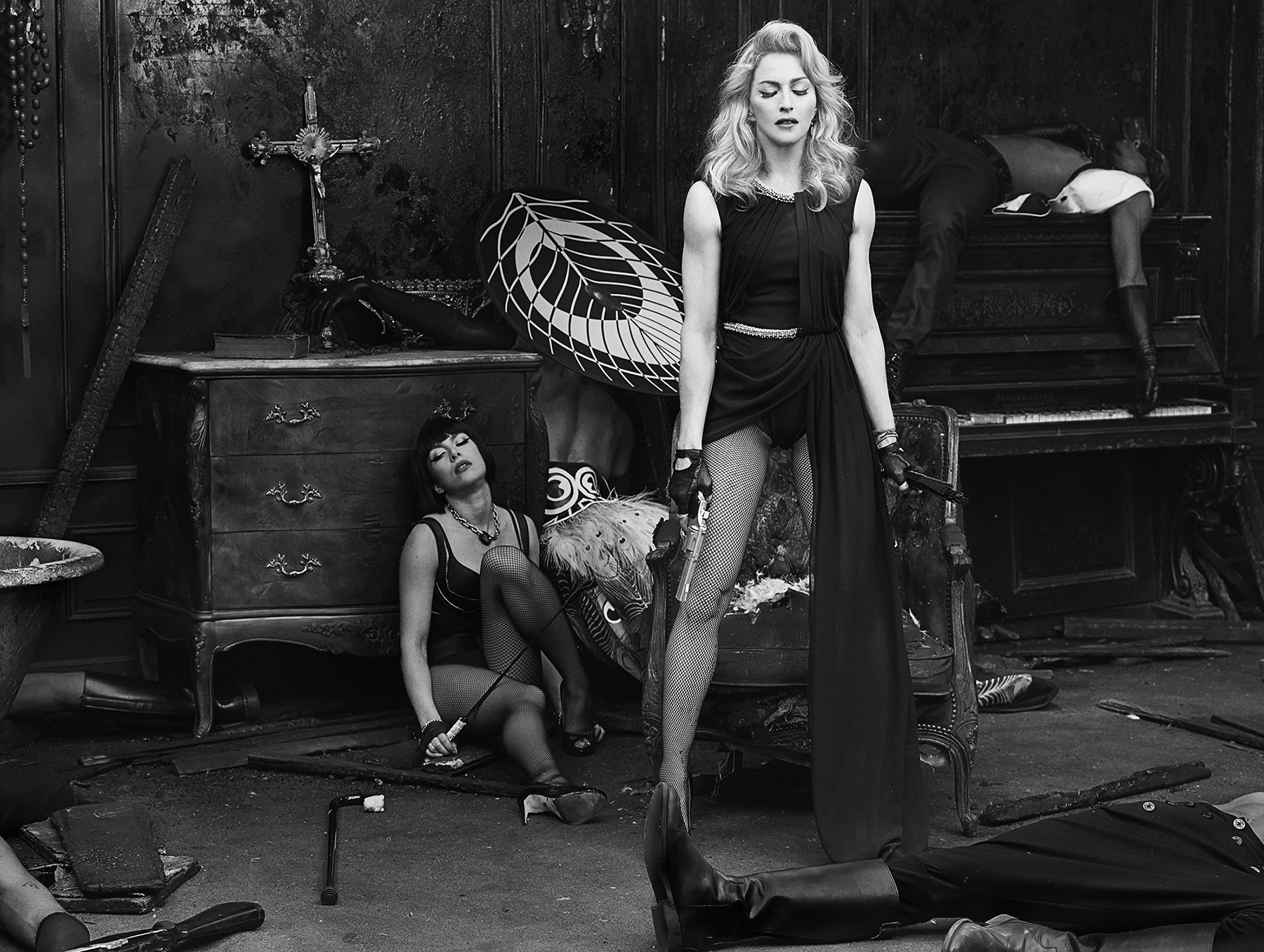 September 17, 2013
Madonna's secretprojectrevolution, the 17-minute film she co-directed with Steven Klein, will be unveiled on September 24th, 2013. The film launches Art For Freedom, an online global initiative to further freedom of expression, created by Madonna, curated by VICE, and distributed by BitTorrent.

"My goal is to show by the example of secretprojectrevolution my creative commitment to inspire change in the world through artistic expression. I hope my film and other submissions to Art For Freedom will be a call-to-action and give people a place to voice their own creative expression to help fight oppression, intolerance and complacency," commented Madonna.

Art For Freedom is a global digital initiative, led by Madonna, designed to fuel free speech - to respond, address and protest persecution around the world. It is an online public art project encouraging the world to express their personal meaning of freedom and revolution, in the form of video, music, poetry, and photography. Public submissions will become part of the Art For Freedom platform: contributors can join the project by uploading original artwork or tagging original posts #artforfreedom.

Art For Freedom launches with the secretprojectrevolution film distributed as a BitTorrent Bundle. The film, plus bonus content, is available to the public for free download beginning September 24 at 9pm PST. Anyone can download and unlock the secretprojectrevolution Bundle (bundles.bittorrent.com/madonna-revolution/) to receive the film, plus bonus content, for free.

The BitTorrent Bundle is a powerful new media format that's built to move freely across the Internet. It is designed to hold any file type, and any file size. And it's designed to encourage and empower free expression, beyond the Internet's walled gardens.

Fans who download the secretprojectrevolution Bundle will instantly receive stills from the film and three HD film trailers. Those who submit their email will unlock access to the Revolution film in both HD and 2K Digital Cinema resolution, an exclusive HD and 2K Digital Cinema interview with Madonna conducted by Eddy Moretti, VICE's Chief Creative Officer, as well as a special handwritten message from Madonna.

"This film operates on many levels. It examines our private prisons. It questions what we do, how we do it, and how we treat others. It questions our governments, and our collective thought patterns. Think about it - the power of art can lead to peace," commented Steven Klein.

"BitTorrent and VICE are both innovative and forward thinking which is why we chose to partner with them on the launch of 'Art for Freedom' platform and the film "secretprojectrevolution," commented Guy Oseary, Madonna's longtime manager.

"Madonna is making a bold move, putting herself out there to support those suffering under repressive regimes around the world. Art For Freedom comes from a place of real empathy and emotion. It's a reflection of a world in crisis by an artist who has decided that apathy is not an option. In one discussion, Madonna told me that she wanted to start a 'revolution of love.' How can you argue with that?" commented Eddy Moretti, Chief Creative Officer, VICE Media

"The Internet drives creativity, democratizes information, and allows people to connect with one another", shared Shahi Ghanem, Chief Strategy Officer for BitTorrent, Inc. "The new BitTorrent Bundle format captures this ideal by giving artists and publishers an entirely new, people-driven distribution tool that is limitless in quality and versatility - enabling them to connect with fans however and wherever they want. Using the Bundle format to help an iconic artist like Madonna share expression freely with the world is a perfect showcase for the technology and we're thrilled to support her efforts."
Comments
16
You must be a logged-in member to add comments.
SIGN IN / SIGN UP
October 01, 2013 posted by rabbitbunny
Secret Project
I love what Madonna's doing. Keep it up-the Fight-Madonna-I love you!-Rabbitbunny
September 24, 2013 posted by teddyblair
Secret Project
Was at the Toronto "Secret Project". I apologize for the weak turnout... but W.E. love you all the more. It was a cold night, but brilliant! The cold night air actually added to the artistic affect. You're a brilliant light in a world of darkness. Tonight really impressed me... and that's hard to do. So happy to have been a part of it.
September 21, 2013 posted by LaIslaMaria
Freedom Fighter
can't wait to express myself-cheers to your new project !!
September 21, 2013 posted by OmarDiJou
Queen Of The Universe
My vote is for you Madonna! for World Leader!!! You are our sanctuary !
September 21, 2013 posted by schanza1597
The Freedom
Freedom, to me, is having the chance to completely express ones own self. It is having the belief that you are in control of everything that you do. Freedom means that you do not have to hide or feel ashamed to practice or live your life as you wish. But only few have been granted this oppertunity by the society. #SecretProjectRevolution #ArtForFreedom
September 20, 2013 posted by Antaeus
Start with yourself.
I agree with you Madonna. There's a lot of intolerance around and I think that the discrimination on the basis of orientation is a strange block of consciousness. And only love and tenderness can change something. I think that tenderness is stronger than passion and aggression. Peoples are unkind to each other.If you want to change the world - start with yourself. Love, patiens, faith, tenderness. If you want Madonna you can take my credo. Start with yourself. Tnank you for your show in Moscow. As usual everything was professional and very interesting. You brings me luck and inspire me. It's a pity I couldn't touch you though I was standing next to the stage. Just one touch. It's so much. Thank you Madonna. I appreciate that I live with you at one time. Evgeny. Ð’ ÐšÐ¾Ð½Ñ‚Ð°ÐºÑ‚Ðµ Ð•Ð²Ð³ÐµÐ½Ð¸Ð¹ ÐÐ½Ñ‚ÐµÑƒÑ.
September 19, 2013 posted by ezili
From Wannabe to Wannado
It seems to be a U turn into your deep expression, the one inside the music, the dance and the art itself. Are U now free to help us to finally awake? Are U gonna bring us to the truth? Are U today in the position to do so without compromising yourself? If so, I salute your courage and proudly claim myself a mature Madonna-fan, ex wannabe, today, fanatic for freedom, expecting this time a generation of Wannado s. U got my support back, We are gonna change the vibe for Reel. Cheers Madame Ciccone.
September 19, 2013 posted by larsdevalk
KNOWLEDGE IS FREEDOM
FREEDOM IS THE WISDOM OF AN OPEN MIND...
September 18, 2013 posted by VIR_69
Madonna Facebook contest
is for all fans of the world or only for USA?
thanks
September 18, 2013 posted by rabbitbunny
Freedom Fighter-Madonna!!
It's great what you're doing Madonna! Keep up the great work, my Lady/Evita!-Rabbitbunny from outside of Baltimore! Hop Madge! Peace and Love!!
September 18, 2013 posted by peeug
The one and only Queen
Thank you Madonna for being such an inspiration to me and the world over. The secret project will be massive just like everything else you have done, L.U.V. you. XX
September 17, 2013 posted by rah2766
EVOL MDNA
This sounds like exactly what the world needs right now! A Big shot of LOVE to shake the world awake! It seems like the more that is taken away from art programs and creative outlets for the youth of the world, the more violent the world becomes. Everyone needs a creative outlet, self expression is a message this world needs, it feeds the soul and frees the mind!! Way to GO! M
September 17, 2013 posted by williewanker
PROMO
We Nee to help to promote this over the social networks. Otherwise no one will do.
September 17, 2013 posted by Anyaina
#artofreedom
Have colaborate with Madonna, being part of her life-time her work or even directing a Blog, is for me such a precious gift, because I always have well known she was the artist WHO personify love, freedom, expression, but especially who change in a very drammatic way the world where we live. I a few time, people will turn to see what she's done... The difference is WE as fans have seen & been supporting her for 30 years! Visit http://www.madonnaenperu.blogspot.com I'm mexican, but peruvian people still waiting for Madonna, deserves this blog :) Devotedly dedicated to PERU.
September 17, 2013 posted by Antara
Secret Project Revolution
I like Madonna's persevearance in politics in addition to each and every one of her endeavors..We should all be glad to be her fans..
September 17, 2013 posted by VicB
MADONNA THE ONLY QUEEN
THANX MADONNA FOR EVERYTHING YOU GIVE US! THE SECRET PROJECT IS GOING TO BE AS GREAT AS EVERYTHING YOU DO!!!
Newer comments    1 - 16 of 16    Older comments