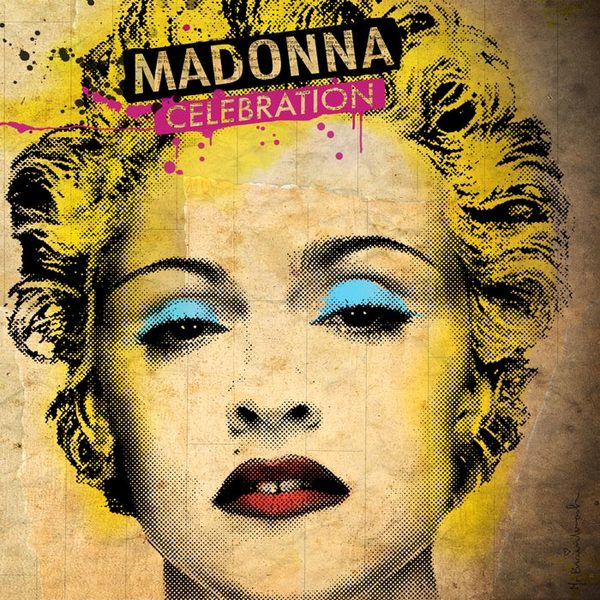 Celebration – In Stores Now!
The wait is now officially over as Madonna’s ‘Celebration’ Greatest Hits album hits the US stores today!

'Celebration' is available as a 18 Tracks CD and as a 36 tracks 2-CD set featuring 'Revolver'. A 2-DVD set including 47 Madonna videos is also available so make sure to get your copy now!

Madonna's Ultimate Greatest Hits Album has also been released as a Deluxe Edition on iTunes, and features all of the 36 songs + 2 exclusive bonus tracks, (including 'It's So Cool' and the Benny Benassi Remix of 'Celebration') as well as 30 videos! Just click here to download!

No other solo artist can match this achievement. Only The Beatles, with a total of fifteen, have had more number one albums in chart history.

This feat marks yet another record for Madonna, the most successful female solo artist of all time. She has also:

Madonna To Attend The Letterman Show
Are you ready to celebrate another moment of TV anthology?

The Material Girl is to visit CBS’s Late Show with David Letterman this coming Wednesday.

This will mark Madonna’s 8th appearence on the show and another great interview you won’t want to miss!

Madonna: 13 Songs Of 'Celebration'
September 22, 2009 - Behind even the most jaded facade beats the heart of someone with powerful memories of Madonna. A pop icon with an undeniable gift for provocation and reinvention, the singer-writer-producer-actor has entered her 50s as a regal sort of musical stateswoman. But in the past 30 years, she's been virtually everything else: a superstar, a lightweight, an unapologetic sex object, a godzillionaire businesswoman, a movie star, an author (of sorts) and a dance-floor-filler of the highest order.

On Sept. 29, she looks back in a collection called Celebration, which attempts to sum up Madonna's remarkably successful career — spanning seven No. 1 albums and more than three dozen Top 10 singles — with 34 remastered hits and two new collaborations, one with DJ Paul Oakenfold and one with rapper Lil' Wayne. Celebration will be available in numerous forms (including a double-disc set, a single-disc distillation and a DVD of videos), but NPR Music has assembled some of its highlights here for the week leading up to its release.

Most of these songs will be instantly familiar to virtually anyone, so NPR Music has assembled a blue-ribbon panel of Madonna fans — culled from NPR's stable of music producers, pop-culture bloggers, arts reporters, newsmagazine hosts and justice correspondents — to offer memories, commentary and analysis of the compilation's highlights.
Read More

A New Raisingmalawi.org
We are happy to announce the re-launch of RaisingMalawi.org.

Three years ago Raising Malawi was founded to bring an end to the extreme poverty and hardship endured by Malawi's 2,000,000 orphans and vulnerable children once and for all.

We’ve launched this site to raise awareness of the dire conditions in Malawi, rally people behind the cause, and to let you know how you can be part of the solution.

At RaisingMalawi.org, you can learn why we must help Malawians, find ways to volunteer at home and abroad, and get your friends involved. You can also check out the Raising Malawi store and purchase goods that will benefit the children of Malawi.

To encourage your support and donations Madonna has issued a challenge and for every dollar you donate she will match it one to one, dollar for dollar. Every bit will help make a difference.

We know the challenges Malawians face are hard to imagine, but we believe that a different reality is possible. If we work together, our effort can do more than just change Malawi—it can foster change for vulnerable populations throughout Africa.

We can’t continue to turn our backs on those in greatest need. This is our chance to lend support. The time has come to raise Malawi.

How do you plan to help?
Read More

Are you ready to play with us? To do so, you will need to design your own ‘Celebration’ single cover...

We have 10 promo-only CDs ready to ship, so click here for more info and to enter the contest now!
Read More

New ‘Celebration’ Video And Exclusive Game
As announced earlier, a second version of the ‘Celebration’ video has been created and features footage of fans filmed during the Barcelona and Milan stops of Madonna’s 2009 ‘Sticky & Sweet Tour’!

Make sure to check Madonna’s official Myspace page by 8:00am GMT tomorrow for the video premiere as well as a related Myspace based game!
Read More 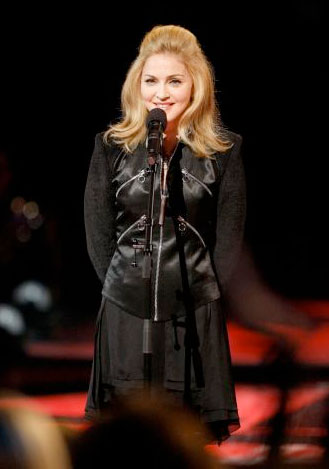 Madonna Surprises VMAs With Michael Jackson Tribute
What was billed as a special tribute to Michael Jackson starring his sister, Janet, turned into an even more epic performance: Madonna took the stage at tonight's MTV Video Music Awards to honor an artist she called "one of the greats."

In a long, heartfelt speech about her personal relationship to Jackson, Madonna recalled the moment she learned that he had died. "All I could think about in that moment was I had abandoned him. That we had abandoned him," she said. "That we had let this magnificent creature who had once set the world on fire slip thorugh the cracks. Most of us had turned our backs on him. … There will never be anyone like him again. He was a king."

"There's a whole lot of crotch-grabbing and Moonwalking going on in my house," she added, saying her two sons are huge MJ fans. "Long live the King!"

Let’s Celebrate Madonna’s 40th Number One Single
In Billboard's September 26th issue (out next week) Our Lady of The Dancefloor Madonna will have her 40th!!! - that's right ' her 40TH NUMBER ONE SINGLE on Billboard's Hot Dance Club Play Chart" - more than any artist in the history of that chart. A list of all her preceeding Number One's follow (feel free to sing along):

Pre-Order The Celebration Remixes On iTunes UK
If you are in the UK, please note that the Celebration remixes have just been added to the local iTunes store and are now available for pre-order.

The remixes will be released in the country as an EP on September 13. 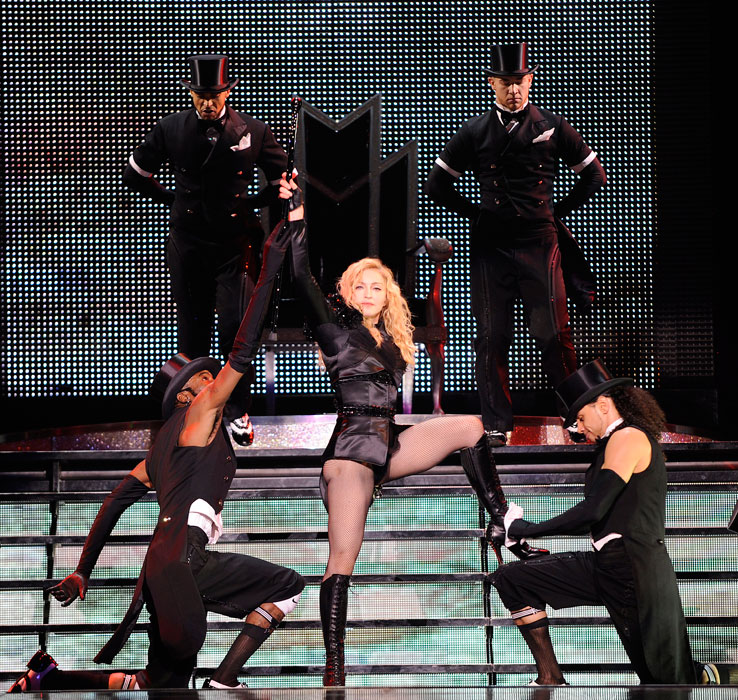 Madonna ‘Takes A Bow’ As Final Show Of Record-Smashing ‘Sticky & Sweet’ Tour Ends In Israel
LOS ANGELES – September 2, 2009 – Madonna’s “Sticky & Sweet” Tour made history as it wrapped up last night with two final shows in Tel Aviv, Israel at Yehoshua Gardens (HaYarkon Park, September 1 and 2). The Material Girl more than lives up to her name, as her tour becomes the most successful tour ever by a solo artist. After playing 85 shows since its launch in August 2008, Madonna’s “Sticky & Sweet” has drawn more than 3.5 million fans in 32 countries and has grossed $408 million, it was announced today by Live Nation, the tour’s global producer. “Sticky & Sweet” is also the second highest grossing tour of all time.

“With ‘Sticky & Sweet’ Madonna has proven yet again that there is virtually no limit to what she can accomplish both creatively and commercially,” said Arthur Fogel, Live Nation’s Chairman of Global Music and CEO of Global Touring.

“Sticky & Sweet” broke Madonna’s previous record of most successful tour by a solo artist with her 2006 Confessions Tour, which grossed $194 million.

Madonna’s upcoming CD, “CELEBRATION” – the definitive Madonna collection – is scheduled to be released at the end of September.

$9,99 Madonna T-shirts – Second And Last Chance
Madonna’s ‘Sticky & Sweet Tour’ final show will take place in Tel Aviv tonight. To celebrate the end of this amazing summer tour, Live Nation have launched a second and last sale allowing you to buy your favourite Madonna tour t-shirts for $9,99 each!

This special sale is one day only, so make sure to visit the official Live Nation store now!