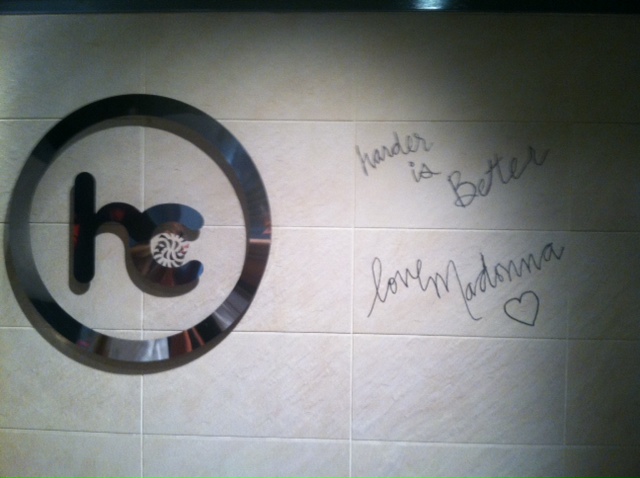 August 22, 2013
Madonna visited her soon-to-open Hard Candy Fitness club in Rome yesterday evening where she signed the club's mantra, "Harder Is Better" on the wall. She also hosted an intimate screening of "Secret Project" at the club for a select group of members, friends and fans. The 17 minute film about tolerance, freedom and love was created by Madonna and Steven Klein.

During a tour of the facility prior to the screening, Madonna was most enthusiastic about the group fitness studio which has a special floating dance floor where members will perform the brand's signature Addicted to Sweat workout programs, which are based on her personal workout routine.

The club will be the first of several Hard Candy Fitness locations planned for Rome and was developed in partnership with Dabliu, one of largest Italian networks in the fitness industry. The first location - a 13,000 square foot facility across from the Coliseum will open for workouts in October with a grand opening event scheduled at that time...An enrollment center is now open at Via Capo d'Africa, 5 and early memberships are currently being offered at exclusive, limited time special rates.

"We were very proud to personally welcome Madonna visit to our Hard Candy Fitness Rome club," stated Andrea and Ugo Pambianchi, owners of Dabliu and Managers of Hard Candy Fitness Rome. "Her presence here has been truly inspiring and we cannot wait to pass her energy onto our members. We are pleased to announce the opening of our second location and offer another luxury fitness brand to residents in our city!"

The second location of Hard Candy Fitness is on Viale Romania, 22 - near the center of the city. The facility will be a conversion of a 21,000 square for Dabliu Parioli club and is also scheduled to open October 2013.

Hard Candy Fitness, founded in partnership with Madonna and New Evolution Ventures (NeV), has also recently announced that the first of several Hard Candy Fitness clubs in Berlin will open in September, joining the current locations in Sydney, Santiago, Mexico City, Moscow, and St. Petersburg, Russia. The brand is expected to announce the opening of multiple locations this year as it continues its expansion into destination cities around the world.

For more information about Hard Candy Fitness Rome and exclusive membership opportunities, contact Hard Candy Fitness Colosseo, T. +39-06-70490452, or visit www.hcfroma.com/contattaci and www.hardcandyfitnessrome.it
Comments
5
You must be a logged-in member to add comments.
SIGN IN / SIGN UP
September 03, 2013 posted by madonnaboyfriend17
"HARD CANDY FITNESS IN ROME":
..GOOD LUCK QUEEN MADONNA. Bests Regards, mv.
August 30, 2013 posted by michael298
#SecretProject
Congratulations on building another one of your Hard Candy fitness center's. MDNA tour DVD/CD can't wait to get it!! I hope the secret project won't be too much longer because it looks AMAZING! but like you I will work on my impatience. Also, Whats with the Billboard '2014.02.12 to be unveiled'??
August 27, 2013 posted by rabbitbunny
Good job M!
Stay Fit and Be Strong Madonna, the lady that you are and always will be! Cheers!-Rabbitbunny from Outside of Baltimore!
August 23, 2013 posted by LaIslaMaria
Let's Get Physical
happy to see Hard Candy Fitness expand and grow for Madonna-wishing her much success !!
August 22, 2013 posted by Antara
Madonna Hard Candy Fitness
I am happy for Madonna's success in Rome. She really earned this to happen...Good Luck, always M...You deserve it, and more in the future.
Newer comments    1 - 5 of 5    Older comments