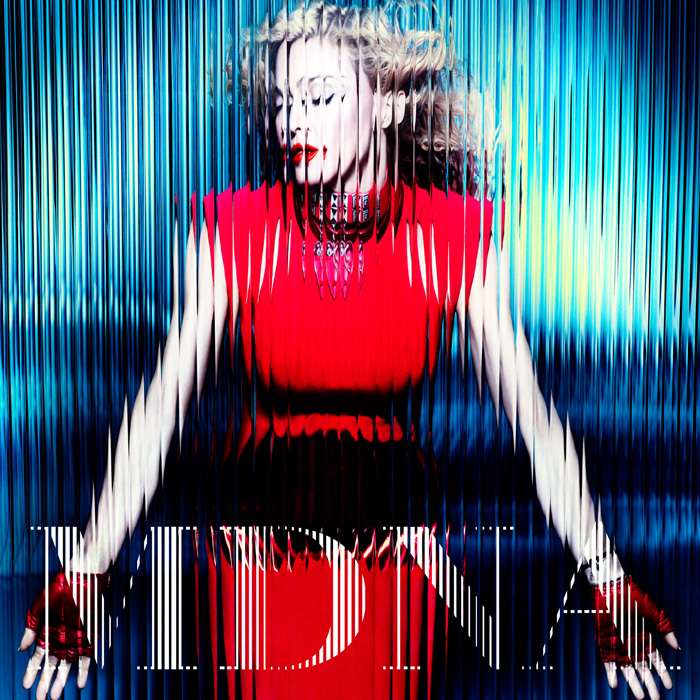 April 03, 2012
Madonna has returned for the 8th time to the top of the Billboard's Pop Charts with MDNA selling 359,000 albums according to Neilsen Soundscan and is the biggest selling first week debut this year. MDNA is The Material Girl's fifth No. 1 studio album in a row and her first album for Interscope Records.

On the Billboard Dance Club Play Charts, Madonna remains queen of the clubs with two song from MDNA in the Top Ten including "Girl Gone Wild" which has gone to No. 4 and is the "greatest gainer" for the last three weeks. Her first dance hit from MDNA "Give Me All Your Luvin" after going to No. 1 remains in the Top Ten in the No. 8 spot.

The critical response to MDNA has been equally impressive:

"Madonna has made it through the wilderness to deliver one of the best albums of her career." Daily News

"Her best album since "Ray of Light" Chicago Tribune

"Still the Queen of Pop" The London Times

"The woman is pop's most durable alpha female" USA TODAY

- MDNA debuted No. 1 on iTunes Charts in 40 countries and had the biggest one day pre sale on iTunes by any artist in history.

- Madonna's "Give Me All Your Luvin'" video is her most viewed video on YouTube with 32 million views.

-Barbra Streisand is the only other female to have more No. 1 albums (9) according to Billboard's Keith Caufield.

-In the UK, the MDNA album puts Madonna in a league of her own. MDNA's No. 1 spot gives Madonna the most No. 1 albums of all time in the UK (12) by a solo artist - surpassing Elvis Presley. The Beatles are the only artists who have had 15 No. 1 albums in the UK.

-In Japan, MDNA is her 22nd Top Ten album passing The Beatles record of l9 Top Ten albums in Japan. MDNA entered their Oricon international charts at No. 1 and the combined Oricon Charts at #4.

To celebrate the first week success with her millions of fans, Madonna will once again be on Twitter this Wednesday, the 4th of April at l0:00 pm EST. The link is: www.madonna.com/askmadonna

Comments
15
You must be a logged-in member to add comments.
SIGN IN / SIGN UP
April 13, 2012 posted by rabbitbunny
Madonna-Back on Top Once Again, Where Sh
What More Can I Say? MDNA is Brillliant! To Lady Madonna Ciccone, Here's to many more years on top! Love You Maddy!
April 09, 2012 posted by josephineicon
MADGE HAD DONE IT AGAIN!!!
HEY LISTEN I HAVE EVERY CD EVER RECORDED AND HAS BEEN GOING TO MADONNA'S TOURS SINCE THE VERY FIRST ONE...THE VIRGIN TOUR BACK IN 1985...SEE YOU AT JOE LOUIS ARENA IN NOVEMBER MADONNA!!!! AND YES!!! I WILL BE WEARING MY 1985 LIKE A VIRGIN TOUR SHIRT!!! ABSOLUTELY NO REGRETS!!!!
April 08, 2012 posted by marowko23
Nr.1 EVER
MDNA is Nr.1 again. And the next 100 Albums are Nr.1, too. LUV Madonna and see madonna live in berlin (June 30, 2012)
April 05, 2012 posted by LaIslaMaria
TOP OF THE WORLD
congrats to you & all involved-keep breaking those records- MDNA is the Masterpiece !!
April 05, 2012 posted by AndrewHecker
MDNA
I love this album, congratulations! My queen Madonna please come to South Africa!!
April 04, 2012 posted by angel080167
MDNA
MDNA Rocks for sure the best madonna album since Confession I feal but Music is at the top also so I love it all
April 04, 2012 posted by elicausi
Not Surprised!
What a fantastic achievement, although I'm not surprised at all. MDNA is a fantastic album, showcasing Madonna's beautiful voice in tracks such as Falling Free and Masterpiece, whilst setting new musical trends in tracks such as Gang Bang and I Don't Give A. I've listened to nothing else by MDNA since I purchased my Delux copy two weeks ago!
April 04, 2012 posted by kaleem
QUEEN OF THE UNIVERSE!
CONGRATUALATIONS YOUR MADGESTY! X <3 W.E. L-U-V Y-O-U MDNA 4EVER <3 X
April 04, 2012 posted by robk06825
Congratulations Madonna!!
There is only one Queen, and that's Madonna!!
April 04, 2012 posted by nil_aycan
I'm addicted to MDNA!
MDNA deserves all these comments. It's a fantastic album, listening it all the time:)
April 04, 2012 posted by AndersonR
Congratulations Madonna!
You are my queen! I'm very happy for you and your fantastic album!!! Brazil waiting for you Gostosa!
April 04, 2012 posted by TheDiCarvalho
Viva Madonna!!! \o/
Brazil loves you! MDNA <3
April 04, 2012 posted by Edu
MDNA
CONGRATULATIONS MADONNA!!!
April 03, 2012 posted by Julzey300
MDNA ROCKS!
Got the album the first day it came out! It took me forever to find it. Not 1 store had it. I coulden't stop listing to it as soon as I got it. It's so ADDICTING. :) All the songs rock! THE QUEEN IS BACK! <3 MDNA!
April 03, 2012 posted by adnilton
Nobody does it better than herself!
Numbers reflects why so many people, so many fans have fallen in LUV with her for 3 decades. M., the more that you give, the more we support you! Nobody does it better than yourself!!!! God saves the QUEEN!
Newer comments    1 - 15 of 15    Older comments