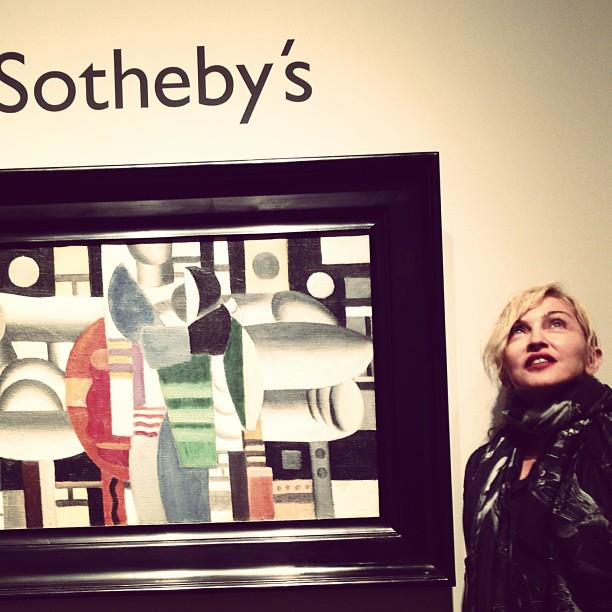 May 08, 2013
Sotheby's was honored to auction Fernand Leger's Trois femmes a la table rouge from the collection of Madonna last night, as part of its Impressionist & Modern Art Evening Sale in New York. The work exceeded pre-sale expectations in selling for $7,165,000 (est. $5/7 million*), with proceeds benefiting Madonna's Ray of Light Foundation (www.rayoflightfound.org) that supports girls' education projects in the Middle East, South Asia and Africa. The painting came to auction for the first time in more than two decades, having remained in Madonna's collection since she acquired it at a Sotheby's New York sale in 1990.

"I am thrilled that my painting sold at Sotheby's above and beyond expectations! I'm eternally grateful to the anonymous collector who bought it - as will every girl who will have a chance to go to school because of their generosity. Thank you. Thank You. Thank you!" commented Madonna.

Fernand Leger painted Trois femmes a la table rouge in 1921, at the height of his iconic Mechanical Elements series. The work belongs to a series depicting three women with still-life components, which the artist began in 1920. Over the subsequent two years, Leger's rendering of his female subjects became increasingly abstracted, and the present example signifies the climax of this transformation. Trois femmes a la table rouge represents a unique Cubist moment for the artist, with its emphasis on strong colors and purified geometries. Other examples from this series are currently in institutions including the Dallas Museum of Art and the Beyeler Foundation in Basel, Switzerland.
Comments
4
You must be a logged-in member to add comments.
SIGN IN / SIGN UP
May 12, 2013 posted by sallyrjnaommy
te amo
te amoooooooooooooooooooooooooooo
May 09, 2013 posted by ladylala
Yay!
Love this. What a great deed and how much better those girls will be! You are so wonderful Madonna!! xxx
May 08, 2013 posted by LaIslaMaria
M DOLLAS
your humanitarian spirit is a blessing - keep doing good deeds - lots of love sent your way xoxox
May 08, 2013 posted by Antara
Madonna's Painting
I am happy once again for this success which comes to Madonna; the painting sale...Madonna has earned every reward and happiness for the years of grinding and continuous work in entertaining the world...Good luck M....you deserve even much more...
Newer comments    1 - 4 of 4    Older comments