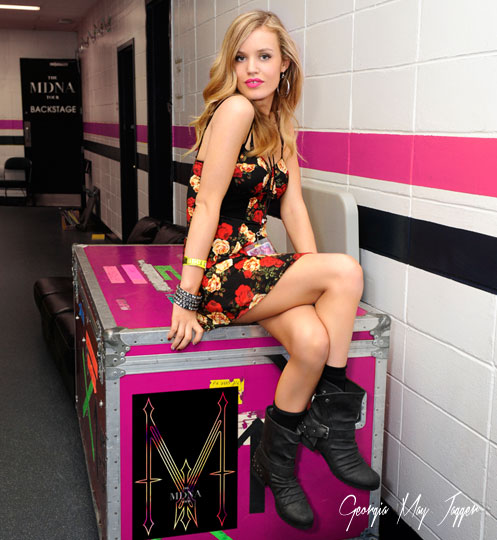 July 02, 2012
MG Icon unveiled its fall 2012 Material Girl marketing campaign today featuring Georgia May Jagger, the daughter of legendary rocker, Mick Jagger and supermodel, Jerry Hall. Jagger follows Kelly Osbourne as the face of the junior brand, available exclusively at Macy's and macys.com in the United States. "We think Georgia May has great style and perfectly captures the energy and free spirit of the Material Girl Fall line," commented Madonna and her daughter Lola.

The campaign creative casts Jagger as the ultimate VIP, capturing her getting "all access" at Madonna's MDNA concert. Photographed at the actual rehearsal for Madonna's MDNA tour at Nassau Coliseum in May, the campaign showcases Jagger behind-the-scenes, on stage, and in the wardrobe room. "I had so much fun shooting this campaign," commented Georgia May Jagger. "I spent a lot of my childhood backstage hanging out around amps. That was where we chilled when we were younger. So this photo shoot brought back a lot of memories. I have always admired Madonna's music and style; she is constantly reinventing herself," she added.

The multi-media marketing campaign will debut in August issues of fashion and lifestyle magazines as well as online, outdoor, in-store and in Macy's marketing collateral. In addition to appearing in the campaign, Jagger will make personal appearances on behalf of Material Girl at Macy's.

Material Girl will hold a sweepstakes giving consumers the opportunity to win pit tickets to Madonna's MDNA tour throughout the United States and Canada. Material Girl correspondent, Briana Herrera, will blog about the concert on Lola's Material Girl blog throughout the tour. For additional information, please visit: www.materialgirlcollection.com